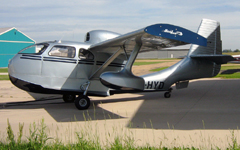 Attached is a picture of my Seabee. It is ship #855, originally test flown May 20, 1947. It was parked, for unstated reasons, in autumn 1969. I acquired it October 10, 2012, in a disassembled condition, from Michael Daubenspeck, who is the son of Jack Daubenspeck. I have since restored it into a flyable aircraft, but not to a “like new” condition. Some its scars still show. The original engine has been overhauled and the propeller has been updated with the recommended changes required by Hartzell. It completed a successful test flight on July 6, 2016 and added one more to the number of Seabees on the planet that fly. 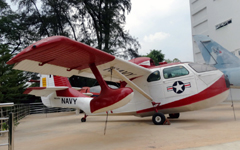 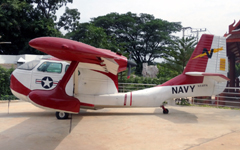 Jean Marc Braun reports from Bangkok that the "mystery" Thai Seabee is now on display outside the Chokchai Museum Pakchong, Highway #2, Pakchong (14.65387176° / 101.348961°).  Jean Marc photographed the Seabee, registered with the fake registration"N64RN", on 8th of January.

Any information on this Seabee will be most welcome!  If you can help with  the true identity of this Seabee - please contact!