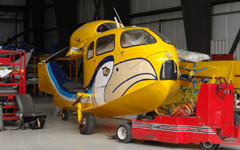 August 24, 2015 - Rumors are that Republic Seabee s/n 355 (C-GIDE) has been sold to China!  Summer 2014 the Seabee was reportedly being prepared for transport in container to China.  Other reports have indicated that there are parties considering putting the Seabee into production in China, in modernized form...  Maybe # 355 is a part of this project?  Any information on this project, and the fate of # 355 will be appreciated! 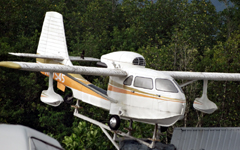 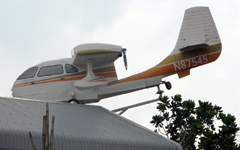 Another Seabee in Thailand!

July 19, 2015 - Received this e-mail and some very interesting photos from Gabriel Blanco;

You make a very good job regarding Seabee history. I´m in aviation fan and this week end came to Phuket, in Thailand.

Yesterday I took the tour to "James Bond island" and I see one Seabee from far during the embark to the boat at Phang Nga pier.

It seems like part of some sort of 007 show (as the Indiana Jones show at Disney Studios) but I´m not totally sure. Nobody have idea about it.

I guess this info could be valuable for you.

This Seabee was unknown to this webmaster!  ANY information on this Seabee will be most welcome!

It looks like "the real thing", even if it is evident that several parts are "home made" just for display purposes.  The wing floats, the tail fin root, exhaust pipe, wheels etc. all seems to be non-standard parts specially made for this display.  The original James Bond Seabee N87545, s/n 105 , was demolished during making of "The Man With The Golden Gun".  However, some parts might still come from # 105? 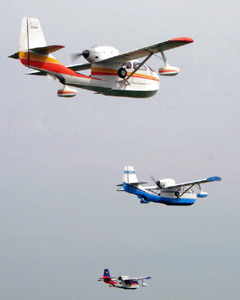 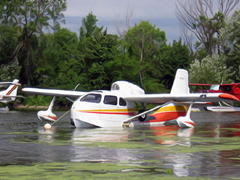 July 1, 2015 - Seventy years ago this year the prototype Republic RC-3 Seabee seaplane made its first flight in Farmingdale, New York, and seaplane enthusiasts will recognize that milestone at EAA AirVenture Oshkosh 2015. A dozen or more examples of the four-seat, all-metal amphibian are expected to attend and participate in special activities both on convention grounds and at the Vette Seaplane Base.

Land-based Seabees will be parked in rows south of the ultralight landing strip for most of the week, while at the Vette Seaplane Base a number of activities are planned for the latter part of the week and weekend. They include a presentation under the big tent on Seabee history at 9 a.m. on Friday, July 24.

Later Friday there will be flybys at both the seaplane base as well as at Wittman, with special parking of all the attending Seabees in the lagoon to try and set a world record of Bees all in one spot. According to the seaplane chairman, they already have 12 airplanes confirmed to attend.

“If we were to get a dozen, we’d be really happy,” said Paul Seehafer, chairman of the EAA Seaplane Base. “The Seabee community is very close-knit, and they’re real excited about us honoring them this year, so we’re hoping to get more examples in one place than anywhere in the last four or five decades.”

On Saturday, July 25, tune into EAA Radio at 10 a.m. for live interviews of Seabee pilots and “other interesting characters” at the Seaplane Base.

In a related story, Canadian company Robinson V-8 Power, which is designing a modern all-composite seaplane based on the Seabee, will participate at the Friday morning presentation.

The Seabee was one of the aircraft type that saw large numbers of airplanes built after World War II as aircraft manufacturers hoped that military pilots returning from the war would continue flying civilian aircraft as private pilots. While that did not occur to the extent companies predicted, Republic Aviation Corp. built a total of 1,060 Seabees, falling shy of the company’s predicted production rate of 5,000 per year. Still, only Piper’s Cub and Super Cub, Beechcraft’s Bonanza, and Cessna’s 140s and 150s surpassed the Bee in numbers produced.

Republic sold its last new Seabee in 1948 and refocused on military contracts. I developed the F-84 Thunderjet, which was built on the same assembly lines used to build over 1,000 Seabees. 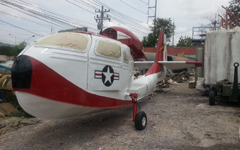 Recently there have been a number of reports that there is a Seabee at a scrap yard in Muek Lek, Mittraphap Road, 'Paisal Phoprasert' scrapyard [14.628894°, 101.174163°], Thailand.  MacAlan Thompson photographed the Seabee on 06 May with a new paint scheme identical to N64PN (Seabee Warbird) in USA.  Previously, in February and March, the Seabee had been seen stripped without paint.

Any information on this Seabee is most welcome!  Can you help with  the true identity of this Seabee - please contact!